You will also need the ceonss map pack http://ceonss.net/viewtopic.php?f=4&t=15#p73
If that is still something missing please post here.
ONS-Europa-C-M5.JPG
You do not have the required permissions to view the files attached to this post.

Well, i tested the map for 2-3 hours and i experienced the following:

The first thing what i saw is the missing preview and a funny misspelling. (I know, look who's talking...)

After that i tried reach a node with tank on the engine. So i figured out i am not safe even on the coverage.
I was able driving through the hellbender when i was careful, but a small jump tied me up, while i had no problem with the paladin.
I tried landing with manta, but it fell apart around the node.
The bots wasn't able reach this node with fast vehicles, they always missed the door.

The location names has a plus space just before the bracket, while the player's name abuts with the location name.
The middle nodes has similar names, i suggest for the 8th node the "Engine-Side Landin Pad" and "Prow-Side Landing Pad" for the 9th node as examples.

When i found the teleported first i was sad it didn't worked with manta, but i think you right, allowing teleporting the vehicles makes very difficult to comeback for the losing team.

I couldn't find the secret room, but i tried hard. I demand label it as "Usable by Miauz"!

Instead i found your alien...

Conclusion:
What i wrote just small things, it's a pretty cool map, i felt in the details, like vehicle availability signs, vehicle accelerator, etc.
The vehicle set is well balanced, and i think you did everything to please everyone, also i think this version is usable right now.
I can't wait for the final version!

Thanks for your feedback Sern, very nice.

What to do: Any volunteers for some of the points, like the minimap?

Other things?
file.jpg
I can give you a hind for the entrance of the secret room. But than it's very easy to find "spoiler":

You do not have the required permissions to view the files attached to this post.

I had a look at the map. First of all, thanks to Cat for making the map and thanks to Miauz you editing it.

I have a bit of feedback on the map design and gameplay. I don't have too much to say on the latter because ideally I like to play it on the server with real people but I've not had the opportunity as of late. Anyway, I noticed these little annoyances:

At the core lifts, the ones that lead to the raptor and cicada, if you stand too close to the edge then you can get stuck between the lift and the edge of the door. You cannot move and have to hope the lift clips through you or you just suicide. Here is an image: 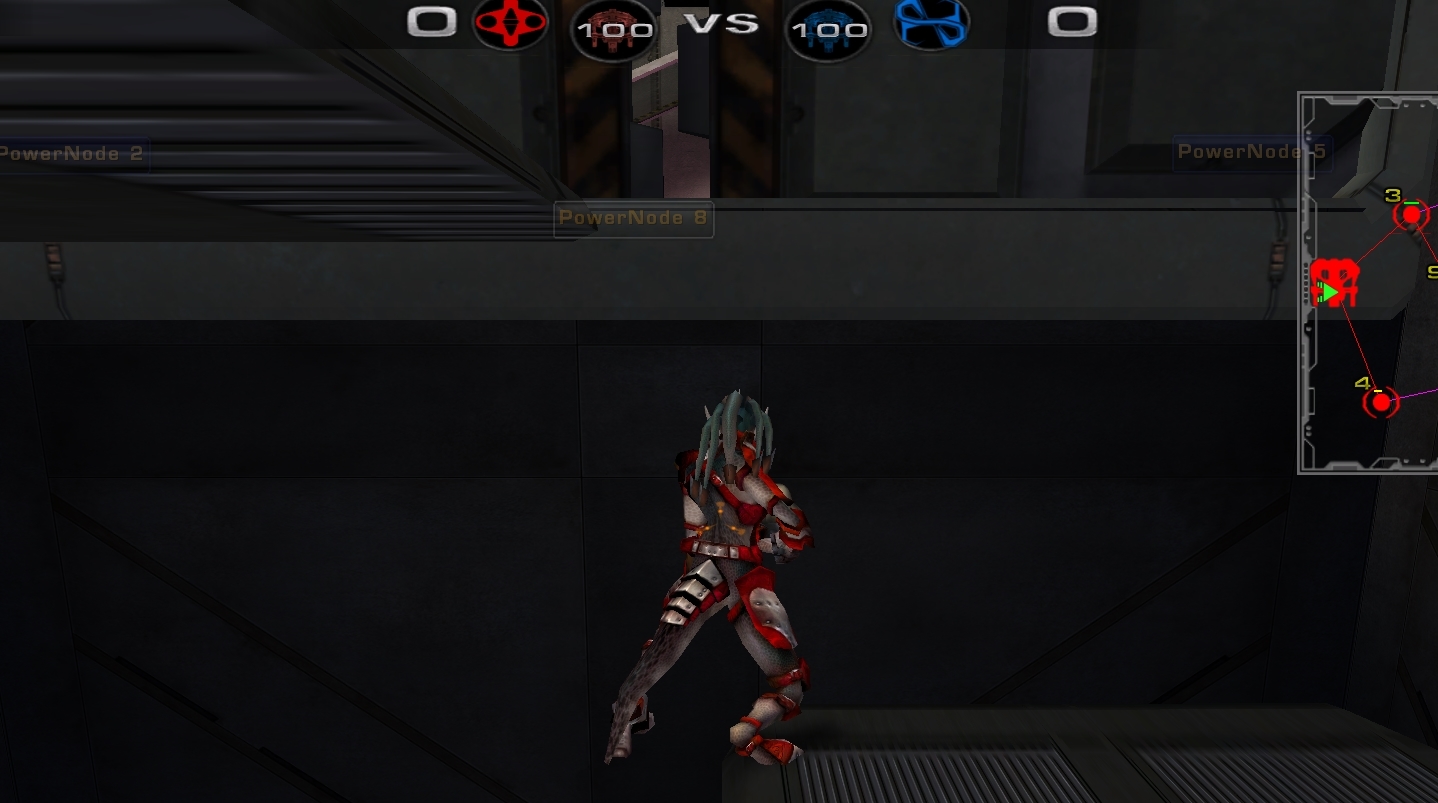 One solution would be to make that metal corner non-collidable or just remove it altogether. It might not aesthetically pleasing though.

Ignoring the aesthetic issue, I don't really like these lifts. The action volume, or whatever it's called, does not seem to envelop the whole of the lift area. So if you accidentally fall and land on the other lift, then it won't immediately bring you back up as you might expect. Instead you have to enter and re-enter the lift. Honestly, I think replacing the lift with two portals would be better but it might take away from the "theme" of the map.

Sticking to the this lift, I don't think it's very obvious that it's there. Of course, there's a big notice that tells you what it leads to. However, from the spawn point, you just hop into a vehicle (or walk) and may not notice it. This might just be my own lack of observational skills, but perhaps placing a couple of spawn points that directly face the lift or, better yet, are located in the hanger would indicate to every player that there are flyers in the core.

Speaking of spawn points in the core, they only seem to be located on one side of the core with one having a jump pad that propels you to vehicles. I think this jump pad has too much force to it. I suggest it puts you between the Hellbender and the Scorpion rather than on the box thing. I understand why it goes to the box (because it's funny), but players want to go to the vehicles. Furthermore, when you initially spawn, it's possibly to accidentally move onto the jumppad because of its proximity. Perhaps a jump pad that goes back the way would work nicely, or even just placing spawn points at the other side of the core.

Sticking to jump pads, I think the central node could do with a few to help players get up those ramps. Not many vehicles seem to spawn there and it seems tedious having to walk up those long ramps.

None of the weapon lockers seem to have snipers. Is this deliberate?

Finally, a little visual bug on those tentacle things at the ship's mast. Apart from that, the map is looking good. I'll come back again once I get the chance to play it on the server.

Thank you. Cat wrote it is a community map. So I think we can make a little room in the map with the names and/ or everyone can have a pictuare there.
I will write the names of all who posted or where I'm aware that they helped. But as I don't know who of you was helping, you need to tell me. So if you had made whatever (like a review, an idea,.. ...or if you just want your name and/ or pic on it) post here. If you want a pictuare on it you have to provide it to me. It has to be a .bmp with 128x128px and the same in 256x256px all others will be ignored without further comment.
So far I have Gloups, Daly, Ema, Sern, ThunderCat.
Did I forget something.

The lifts are nice and better for the flow of the game than teleporters. (Nothing > Warpzone > Lift >= Jumppad > Ladder > Teleporter)
The teleporters go to the box because if you make the on the same high the jumppad will push you in the sky most of the times. If it goes between the vehicles the bots don't have enough space for themselve. You can't adjust the jumppad force, it's calculated automaticly.

I purged the pic thing, unless someone has a pic which s/he wants on the map and give it to me. You can also have your Avatar or a painted pic on one of the pannels. For that I need 1024x512 as .bmp.

I will try to take a look this weekend.

, I find a more detailed image for the planet moon europa, see if you like it better, you can adjust the AmbientGlow of the sm if you want.

For the minimap wanted to have a look but dunno what is wrong with it apart the fact that it is not well centered ?

For those who will use EAX support, i changed the default RoomRolloffFactor to 0.25 in the I3DL2Listener, for avoid abrupt transitions of effects when changing zones (it add a sound radius between zone), seems like the 0 default a forgotten from EPIC .

Thank you. That pic looks very nice Gloups, we will take that version.

The minimap is not well centered, has not the perfect scale and the perspective is a little off.

There is nothing much i can add, the main things have already been said, the multiple exits from the base and the fact that you can also walk on the walls, make comeback easier, and prevents the enemy from just simply spamming the exits with the tank, vehicles are good, balanced, weapons too, i understand the limiting of the lightning gun at nodes, but at least now the core has it, and found the spare ammo to it

tried finding the teleporter to the secret room, crawled into every box/dropship/hole, but no luck, only found the one to the portable ion(that one was obvious)
I like the new look
My opinion, this map is ready for a test flight(terrible pun intended)

Return to “The Creative Corner”