I pulled the stats from the Aggressive alleys game and had my lovely wife plug in the rankings of each player using CEONSS very own stat page, which I love. Boring ole spread sheets like Joe using to argue with engineers aint gonna do it on this one so we went to the pictures! 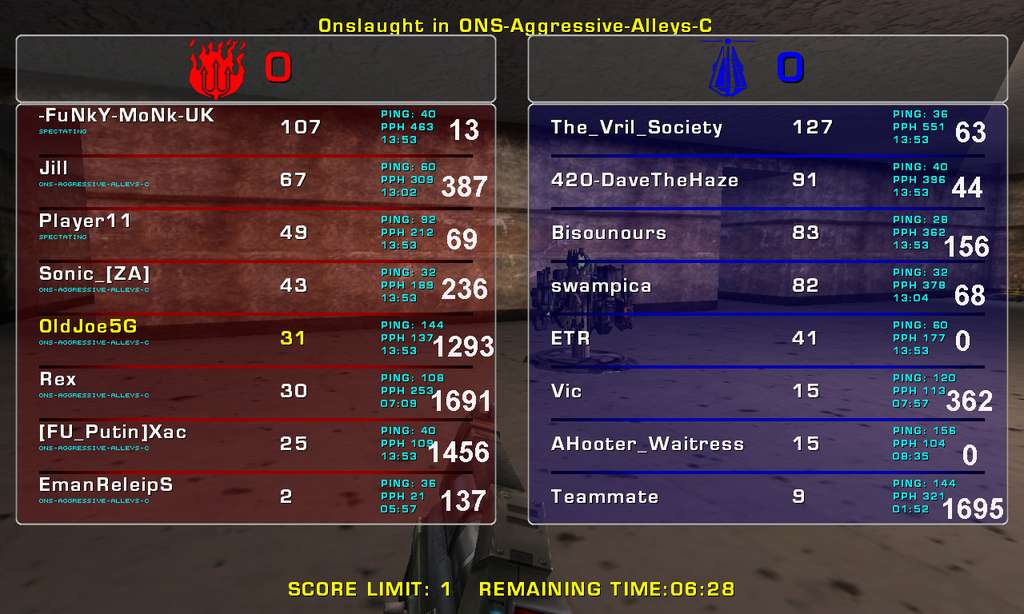 So what were looking at here is a mid game snap shot of the teams and there respective rankings. Now for me the teams look pretty unbalanced buy the numbers. I let you guys have a look and Ill add some comments later on.

I pulled al the stats from the link here and I pulled the rankings from Sunday 11 am EST. 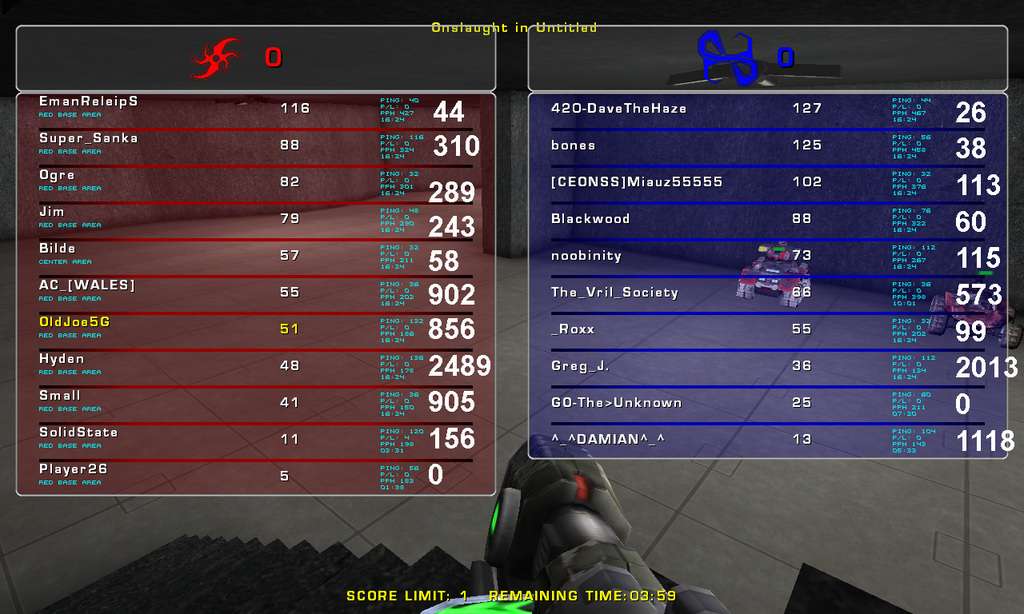 I did the same thing this Friday on the map Doubleslap.

Thanks for looking.
Top

I don't understand how any of this constitutes a "minor problem with the team balancer". You mention that "the teams look pretty unbalanced buy (sic) the numbers", but then you go on to explain that you "pulled al (sic) the stats from [CEONSS' UTstatsDB ELO ranking]", which raises the crucial question: your hypothesis of a problematic team balancer is supported by which numbers, exactly? Because if it's the individual players' PPH (and thus, collectively, the Team PPH metric) that might be something leaning into and studying at a larger scope to determine whether some aberration worth addressing does arise.
If, OTOH, "the numbers" you're referring to are the ELO rankings that CEONSS' UTstatsDB setup displays and attempts to calculate after each match, the immediate follow-up becomes this: how did you conclude those were ever relevant to team balancing, or even reliable in any broader sense to begin with? Because I can tell you with a high degree of confidence that they're not, and no sensible modder trying to comprehensively tackle the problem of balancing teams ingame via reliable, relevant, and dependable/available stats would (or should) ever attempt to involve UTstatsDB's ELO rankings in their considerations, for a number of reasons that right now are a bit outside the scope of this thread (very briefly, ELO rankings aren't suited to this type of problem, even when done right).
Eyes in the skies.

Thanks for reading!
Top

I want to add something important that this is in reference to the Evenmatch program Wormbo wrote that uses PPH to balance team skill.

My apologies on all that confusion.

The thing is that Evenmatch and our stats database aren't connected, and log their data differently.

Evenmatch is using it's own database of PPHs, which is stored on the server itself in a .ini file. Evenmatch deletes this data if it has not seen a players for 180 days. (Used to be 30 days before, but that caused problems with players such as Dally and Fors, who play only rarely these days, but are rather strong player.)
Evenmatch also logs the PPH based on the GUID, so peeps sharing the same GUID (like all those who bought their game on GOG and are using their default key) will mostl likely have their Evenmatch PPHs all mashed together into one.

The stats database has some sort of own ranking system, which you have refered to in your screenshots. But we don't know what exactly this is based on, so using it in order to analyze if teams are fair or not is tricky. It also seems strange to me that some regular players like Go-The-Unkown and AHooter_Waitress don't have any ranking at all.
I don't know how the stats database differentiates between players, but it does seem to take the username into account, thereby potentially avoiding issues with shared GUIDs but creating new issues by creating a new user profiles any time that someone decides to use a new name or changes something about their spelling. -> see AC[Wales] versus AC_Wales, -Nick- vs -Funky- , or all the different Swampicas (that one has so many different database profiles that I'm wondering if the IP also plays a role).

I think it would be more helpful to compare the SPH from the stats database (which I assume means Score Per Hour, and seems to be the stats database's equivalent of Points Per Hour), which you can see here in row 8: http://stats.ceonss.net/index.php?stats=players
However, in cases where someone has several stats database entries, it still brings up the problem of which one to use.

Overall, it should still be noted that the stats database and Evenmatch are not connected, and Evenmatch might have logged very different PPHs due to the previous "delete after 30 days not seen" setting and attaching the PPH to the GUIDs, whereas the stats db has continously logged stuff since October 2018, but matched them to players in a different way. So drawing conclusions from one to the other is gonna be imperfect either way.

Thank you as always...and thank you letting me edit my title!
Top
7 posts • Page 1 of 1